Journeying deeper into our Nashville to Asheville to virtual road trip into today’s Vagabond Warrior segment we are going to delve into the roots of Nashville’s music scene.

Nashville is situated in a geographic confluence of east meets west, north meets south – it is a crossroads of culture – from the Native American cultures of prehistory to the Delta influences and Cumberland Gap sounds to Bluegrass and Americana.  Nashville has always been a hub for music and culture.  It has a rich history rooted in western lore and America’s manifest destiny.  Nashville has witnessed tragedy and triumph, despair and hope – stories in the cities history and present make it an ideal spot for troubadours and traveling bands.  About.com has a great set of features on Nashville’s historical timeline.

Nashville witnessed the horrors of The Civil War and emerged from the devastation with a renaissance of legacy and a future on industry.

This confluence of culture has breathed a creative fire in Nashville from the African influences and Delta Blues to the ragged fiddle beats of the Appalachia and folk movements in Americana to jazz and classical odes to rustic rock and the Tennessee twang and pop beats that brought the likes of Patsy Cline, Elvis and Johnny Cash into the national spotlight.  Nashville is music – music is in the DNA and represents the strains of personality of varying cultures and converging ideas in collaboration and creation.

Geography rings true that ‘all roads lead to Nashville’ but it runs deeper than geography – it is the southern and western spirit of storytelling as the art of truth and culture as a builder of communities.  While Nashville is a diverse patchwork of varying races and cultures – the unity of the community comes from accepting diversity in creative expression…this foundation goes back to the beginning of Nashville’s moniker of ‘Music City.’

In the 1800s, in the wake of The Civil War, Nashville became home to renowned African-American college Fisk University.  The Fisk Jubilee Singers became the first internationally touring music act – traveling the world to promote their unique African-American voice in song and shed light on the plight and hope of freed slaves – The Queen of England commented on the talent of The Fisk Jubilee Singers saying ‘they must be from Music City.’ 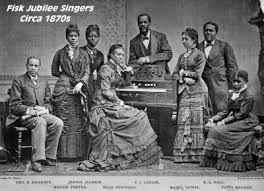 In the late 1800s Nashville became the headquarters for American publishing, this was only later overshadowed by New York.  One of the most vibrant parts of downtown Nashville is Printer’s Alley – where the core of Nashville publishing was headquartered.  Publishing brought forth a creative business platform which still exists in Music City today from local book publishers such as Thomas Nelson and Zondervan (Nashville remains the world center for Christian publishing) – but also Music Publishing.  Nashville is the home to the majority of all of the world’s publishing houses and has more songwriters per capita than anywhere else in the world.

Nashville actually earned the nickname Athens of the South in the 1850s to turn of the century because it was a place of art and higher learning.  When the city hosted the World’s Fair – they built a perfect scale model of The Parthenon (a permanent structure was built after the fair due to the popularity of the concept with locals) which still gleams in glory on the grounds of heavenly in town city green oasis Centennial Park.  You

The Ryman Auditorium is the Mother Church of Music – Country and Beyond.  It was built as a church before finding its place in history as the original home of the Grand Ole Opry.  The Grand Ole Opry commenced in 1925 with WSM radio station – the weekly series helped build the music business in Nashville.  By the 1950s a Nashville Sound emerged out of the early honkytonk impressions – this shift ushered in a new era of music in Nashville – Nashville became the top place to record and remains so today.  While Nashville is often focused on the hot new sound and radio promotion – what really makes Nashville great is its under the radar – Independent Music Vibe – the work of the ‘little’ songwriter singing chords of truth against the power machine is a happy unison – at times battling it out – but for the most part the symphony that keeps Music City relevant, ethereal and home grown.

In this series of columns within ‘Nashville to Asheville’ we’ll tour some of Nashville’s premier music heritage sites, music venues, focus on some bands and sounds and if given the time I’ll delve into a little more history about the rhythms of Music City.

While at Belmont University I had the privilege of taking a course on The History of Music – with a focus on Nashville – my notes and course books were lost in a move – but you can get a peak into the course with this book on The Nashville Sound, with a foreward by my former professor Donald Cusic

*I am partnering with my other blog ‘Adele Belle’ for this journey and from time to time may link some articles to ‘Adele Belle‘ – Vagabond Warrior’s mission is travel and culture, Adele Belle is focused on lifestyle from body, mind, cleaning (Messy Closet/Clean Closet), recipes (Antebellum Kitchen)…both sites have an independent spirit that complement one another.  I hope you will explore Adele Belle as well.